﻿ Which Dog Breeds are the Fastest?
Dogs

Which Dog Breeds are the Fastest? 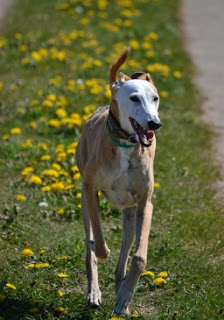 The Greyhound is hands down the fastest dog breed around with a top speed of about 45 miles per hour. Some people claim the greyhound is the second fastest land animal, right behind the Cheetah (70-75mph); however, other land animals like the Lion (50mph), Pronghorn Antelope (61mph) and Wildebeest (50mph) are faster than the Greyhound which sits at number 7 on the list. There are other fast dog breeds right on the heels of the Greyhound, and some of the breeds might surprise you. Keep in mind, the “fastest list” isn't one everyone agrees on.

The Whippet (35.5mph) and other sighthounds like the Afghan Hound (40mph), Scottish Deerhound, Borzoi (38mph), Saluki (43mph), and Ibizan Hound were bred to sight their prey, give chase, and wear them down. Sighthounds hit their top speed in only a few strides and are built for endurance. In a one-on-one race with a cheetah, the Greyhound or other sighthounds could easily outrun the big cat, because a cheetah's top speed is only good for a short distance.

The Siberian Husky has a top speed of around 28mph, but the dog is like the Energizer Bunny and will keep going and going. Endurance is the name of the game for a Husky. A team of dogs can maintain an average speed of 10-11 mph and run for hours, covering around 150 miles in a day. They can withstand a harsh winter climate and have great instincts for finding a safe trail under snow and ice. 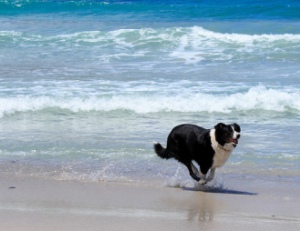 The Border Collie is a speedy and agile herder with a top speed between 20-30mph, a speed they can maintain as they quickly twist and turn to keep livestock in line. They can work over rugged terrain with the same surefooted confidence of the sheep they herd. Considered the smartest dog around, the Border Collie is quick to learn new commands, especially if he's offered his favorite CANIDAE treat.

The Rhodesian Ridgeback can hit a top speed of around 20mph. They were once called Lion dogs because at one time in their history, that's what they were used for, hunting and chasing lions in their native land of South Africa. The Ridgeback is both a sighthound and scenthound, and has a unique ridge of hair that runs down their back. Today, the dog is used in lure coursing. This is another breed built for endurance so they can run down and wear out the prey they're hunting.

The Jack Russell Terrier may be a small dog, but he can reach a top speed of around 20-25mph for a short distance. The talent of a Jack Russell is his ability to go underground after foxes, woodchucks and raccoons. He is an aggressive, confident and diligent hunter. Don't be fooled by this dog's size. He needs plenty of exercise to keep him from becoming bored.

The German Shepherd and Belgian Malinois turn in an impressive speed at around 30mph. These dogs are obedient, protective and hard working breeds. Both are smart, loyal, muscular, alert, agile and strong willed, with a fearless attitude. They are a favorite for the military and police force because of their work ethic, intelligence and speed.

The Anatolian Shepherd has a top speed of 28mph and is being used in Namibia, Africa as conservation dogs to help protect the Cheetah from extinction. To keep farmers from killing the big cat, the Anatolian Shepherd, which is a flock guarding dog, lives with his sheep “family” and protects them from the Cheetah and other predators. These dogs are capable of working on their own without the help of any humans and they are extremely skillful and diligent at doing their job. 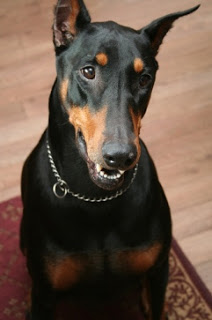 The Doberman Pinscher can easily come in at a top speed of 32mph. The breed was developed in Germany in the 1800s by Louis Dobermann, a tax collector. He wanted a sound bodyguard and watchdog powerful enough to discourage thugs and robbers from attacking him when he traveled through unsafe areas while on the job.

The Giant Schnauzer tops 28mph and excels as a guard dog. The breed was originally used in Bavaria as a cattle driving dog by farmers taking their livestock to market. Butchers and breweries also used them to guard their businesses. The Giant Schnauzer is a larger version of the Standard Schnauzer and is brave, easy to train, loyal, powerful, active, muscular, very intelligent and reliable.


- Which Dog Breeds Excel In Agility?
By Linda Cole When people think of a specific dog breed for the sport of agility, the image of a Border Collie often comes to mind. The dog’s piercing eyes are focused on his human partner as he waits to start his run. Both dog and owner are pumped...

- The Most Talkative Dog Breeds
By Linda Cole My Redbone Coonhound always had something to say, and always got the last word, especially when I made her move out of my chair. Rosie let me know she was giving up her spot in protest and filing a complaint to whoever would listen. She...

- The Easiest Dog Breeds To Train
By Linda Cole If you're willing to put in the time and commitment needed to train your dog, any canine can and will learn. However, some breeds are easier to train than others. A dog’s intelligence plays a role in training, but so does a willingness...

- The Best Dog Breeds For Runners
By Suzanne Alicie We’ve all seen those movies and television shows where the faithful dog keeps pace with his owner as they run through the park or on the beach. Luckily I am not a runner because my dogs would be dragging me all over the place. While...

- Medium-sized Dogs
For most of us today, a family is not complete without a pet. The pet is as good a part of the family as we are. Though there are various reasons why people want to adopt a dog, the main reasons are for company and for guarding. Nowadays, dogs really...