﻿ How to Deal With German Shepherd Aggression
Dogs

How to Deal With German Shepherd Aggression 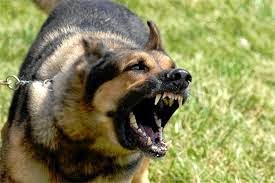 Originally bred to guard and herd sheep, German Shepherds are naturally athletic dogs. The fact that they are also highly intelligent has earned them the reputation of being ideal police and therapy dogs. They can also be the perfect pets if you know how to train and handle them properly. The sad thing is that many people buy them without first taking time to find out the best ways of handling this breed. This initial neglect often leads to the manifestation of negative behaviours such as German Shepherd aggression.
Take note that aggression is not a normal or typical characteristic of the breed, or any other breed, for that matter. Rather, it is the sad result of a lack of proper training. You have to remember that these Dogs were first bred to herd and guard sheep, so they are used to being leaders of the pack. To prevent German Shepherd aggression, therefore, YOU will have to firmly establish yourself as the pack leader and socialize your dog sufficiently so that he does not become over-protective.
German Shepherd aggression is often manifested through growling, loud barking, lunging, snapping, and even biting. Suspicion, wariness, and fear are the three most common causes of aggression. Being suspicious, especially of strangers, is instinctive in these dogs. It can be traced back to the times when these dogs were kept solely for guarding and herding purposes. German Shepherds are also naturally wary of anyone who approaches them while they are eating, so it is best to keep your distance during mealtime. Finally, German Shepherds often feel that the best defense is a good offense, so they snarl and bite whenever they feel that something or someone is about to hurt them. This makes socialization all the more important to prevent German Shepherd aggression.
Be sure to start training your dog at an early age because training can become more difficult and time-consuming if you start late. Starting late often means that the dog has already formed some bad habits that are a bit difficult to change and this may include German Shepherd aggression. While we mentioned earlier that you need to establish yourself as pack leader, this does not mean that you have to punish your dog harshly whenever he exhibits aggressiveness or any other unacceptable behaviour. Simply grabbing him by the scruff of his neck and giving a little shake should be enough correction, as this is the way it is often done in dog packs as well.
Just as bad behaviour is corrected properly, good behaviour should also be rewarded accordingly. Your dog must learn that while aggression results in scruff grabbing and brisk shaking, there are other behaviours that carry better results. Give your dog sufficient praises, pats, toys, and his favourite food treats whenever he exhibits good behaviour. It is also important that you give your dog enough exercise. German shepherds need at least an hour of solid exercise each day. This is a very good way for them to release pent up energy and prevent German Shepherd aggression.

- The Beauty Of Black German Shepherds
The Black German Shepherd makes a great family pet. He might be a little strong for small children, but with the proper training will become very respectful of the wee ones. He is a very loyal and watchful dog with a very pleasant temperament. He is extremely...

- How To Care For A German Shepherd
A German Shepherd, also known as an 'Alsatian', is a dog breed which is known for its intelligence and agility. Mainly used for catching anti-social elements by the cops, this dog is also the perfect example of an ideal family guard dog for...