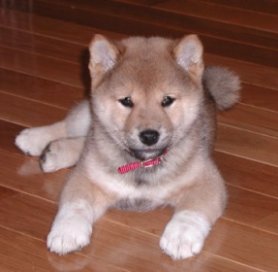 The Shiba Inu is an ancient breed that originated on the island of Japan and is a descendant of the primitive dogs of the ancient Japanese people. The breed can trace its roots back to the third century B.C, although it was not officially named until the 1920s. They are Japan’s number one companion dog.

The Shiba Inu is a member of the AKC’s Non-Sporting group, which is interesting when you consider they were originally used for hunting, primarily to flush birds and small game. They were also used for hunting bear and boar, due to their superior senses and ability to traverse steep hills and mountainous regions that were inaccessible to people. According to Merriam Webster’s online dictionary, Shiba means brushwood and Inu means dog. Some Shiba Inus’ coat color is the same reddish color of these trees, hence the nickname brushwood dog.

The Shiba Inu is the smallest of the Japanese dog breeds, and through the Japanese Cultural Properties Act, they were declared a natural product of Japan in 1936. World War II and outbreaks of rabies and distemper brought the breed to the brink of extinction. Dogs from the three remaining types of Shibas were interbred to repopulate the breed.

Shibas are fastidious dogs, and many tend to avoid puddles. They are a confident breed and are fearless, courageous, brave and alert. They are fairly easy to housebreak and should be well socialized as puppies because they can be reserved with strangers. They need a firm hand and need to know their owner is the alpha of the pack, or they can become stubborn and will try to rule the roost.

They bond well with their family members and can be great with children, cats and other dogs. However, they 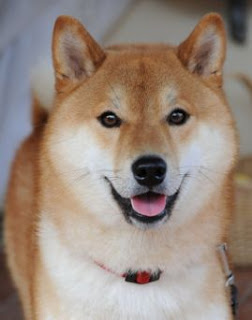 should not be left alone with smaller pets due to their natural hunting instinct. Since their instinct to chase is strong, caution should be taken when walking them off leash. They don’t bark much, and are good travelers. They need daily exercise to keep them from misbehaving or acting out. A Shiba Inu can live in an apartment, but needs sufficient exercise. They do best in a moderately sized yard. As they regard themselves as a member of the family, they are not happy if left outside alone.

An adult male Shiba Inu ranges in size from fourteen to sixteen inches tall and weighs between eighteen and twenty-five pounds. Females range from thirteen to fifteen inches tall and weigh between fifteen and twenty pounds. The breed can be prone to patellar luxation (slipped kneecap), PRA (progressive retinal atrophy) and hip dysplasia. The life expectancy of a Shiba Inu is between twelve and fifteen years of age.

The Shiba has a short haired coat which is easy to groom. They do well with several brushings a week and do blow coat during shedding season. Their coat has a natural waterproofing and they should only be bathed when necessary so it is not removed. If you are looking for a happy, friendly dog for your family or just a walking companion with great endurance, the Shiba Inu may be right up your alley.


- Breed Profile: American Indian Dog
By Ruthie Bently The American Indian Dog history goes back 30,000 years in both North and South America. They were used by Native American tribes for herding, tracking, corralling bison, running down deer, hunting bear and guarding, as well as pack animals...

- Dog Breed Profile: Korean Jindo
By Ruthie Bently The Korean Jindo is a Spitz type dog of a medium size with a double coat native to Korea, specifically the island of Jindo in South Korea. It is believed that the breed originated on Jindo Island where they were bred several centuries...

- Social Media Has Gone To The Dogs... And The Cats Too!
By Julia Williams Not so long ago, it used to be frowned upon for people to give human characteristics to animals, which is known as anthropomorphism (how’s that for an unwieldy word!). Those who were against it said things like “animals shouldn’t...

- Breed Profile: Basenji (congo Dog)
By Ruthie Bently The Basenji is a small hunting dog native to Africa (also known as the Congo dog). The African natives used it for driving game into nets and for pointing, as well as retrieving wounded game. It was also used to warn about dangerous...

- Low Maintenance Dogs
There is no dog that requires zero maintenance! Toy breeds like Shih Tzu, which is a high maintenance dog, requires grooming after every two weeks, while a dog like Siba Inu can groom itself. Many times it happens that pet lovers buy a pet, enjoy...